Kid Art Tattoos are just sooo cute. These are tattoos made by children, usually for their parents. They’re inspired, creative, and amazing. ENJOY!!!People passionate about tattoos and loving parents; what an inspired combination! Lately, they came up with an extraordinary trend, namely kid art tattoos. Displaying kid art on the fridge is no longer the highest merit you can offer them. Now, you can pick a design you like most and ask for a copy on your skin. Celebrities, such as David Beckham, opted for this original idea, transposing extremely dear messages or drawings from his children into permanent artwork.

Moreover, a regular dad from Ontario became popular thanks to his initiative to get kid art tattoos. He said that people around him were not familiar with the concept and that few things in life are as dear to him as his kids and tattoos. Luckily, he wasn’t already filled with ink like David Beckham is, so he will have tattoo sleeves entirely made of drawings.

We’re not talking about extremely talented kids here. We’re talking about normal drawings a 7 year old is capable of. So, expect 5 lines instead of a realistic human shape. If you have a flexible perspective, you’ll realize how valuable doodles are. Some parents may search for old drawings in the attic and look at them, but simply looking at them will not feel as good as having them with you; always.

In case of kid art tattoos we cannot speak of any particular tattooing technique. Most of the times, tattoo artists use thin needles to draw exact lines. Shading is not involved in most cases. However, you’ll conclude that shading isn’t necessary when you’re proud of your progeny. Kids draw people, humanoids and plants. As it follows, you can take a look at their masterpieces, their caring parents and the at kids themselves!

25. A square-headed robot with no arms 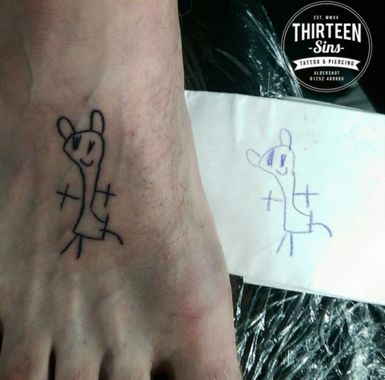 The simple lines, use of colors and overall impression leads to the conclusion that a toddler did this tattoo design. He or she didn’t find any use for arms in a robot because it can communicate with the power of its mind. The transmitter thingy on its head clearly sends that message.

24. A smiling animal with three legs 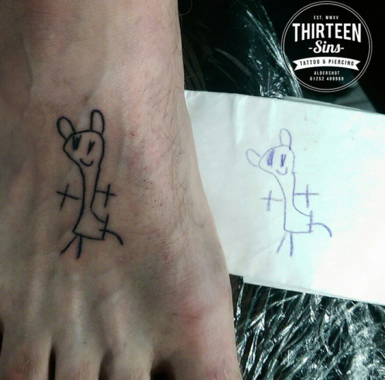 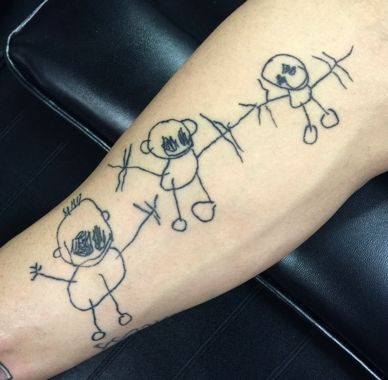 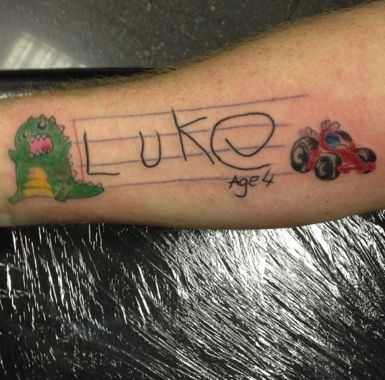 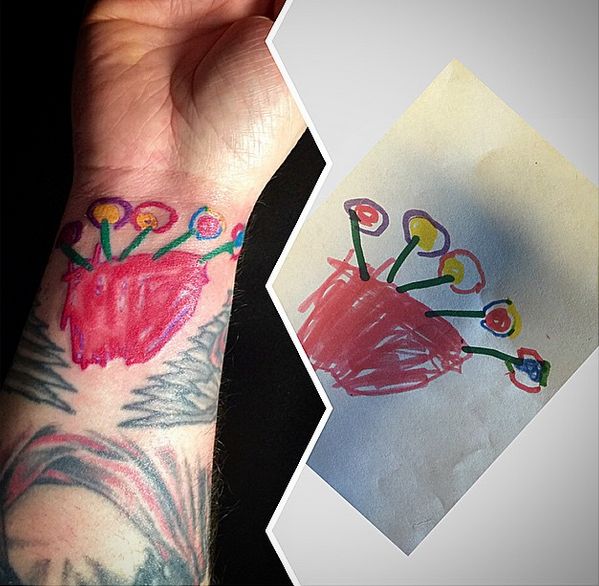 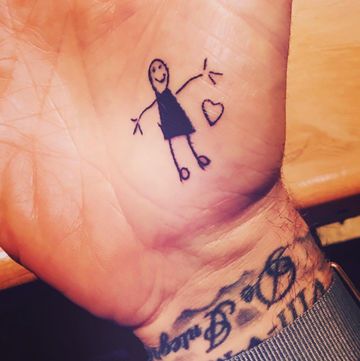 Harper is David Beckham’s girl. She designed the silhouette of the girl you see on his right palm and people went crazy about it. A permanent reminder of his daughter, this tattoo is not the only one signed by his kids. His three sons came up with a lettering tattoo that says, “We love you daddy”. That one is inked on his ribs.

20. Two bald monkeys and a third one 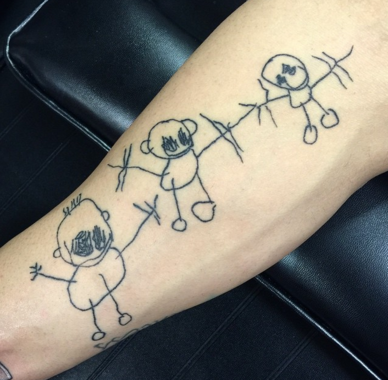 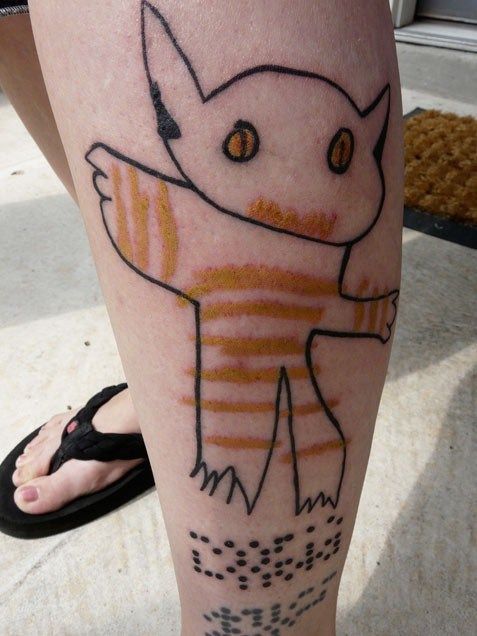 18. Riding a dinosaur with hat off 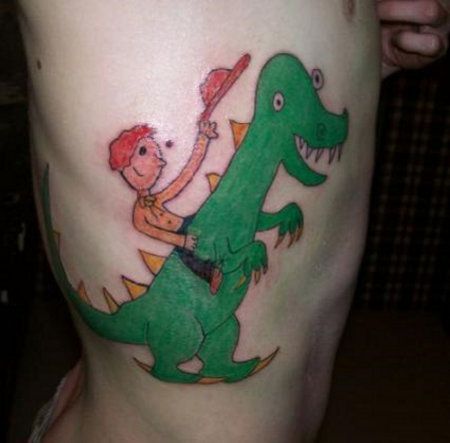 Judging by the fine outline of this drawing, it was made by an older kid. Kid art tattoos range from 4 year olds to 14 year olds, so the outcome is always unexpected. He or she thinks Dino may be ridden. Could that be a positive thing? 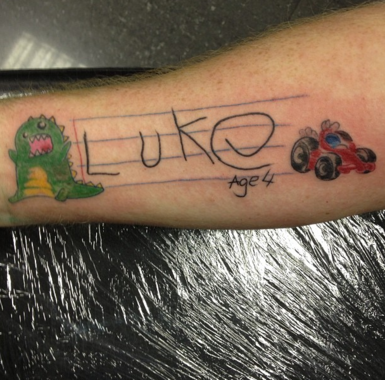 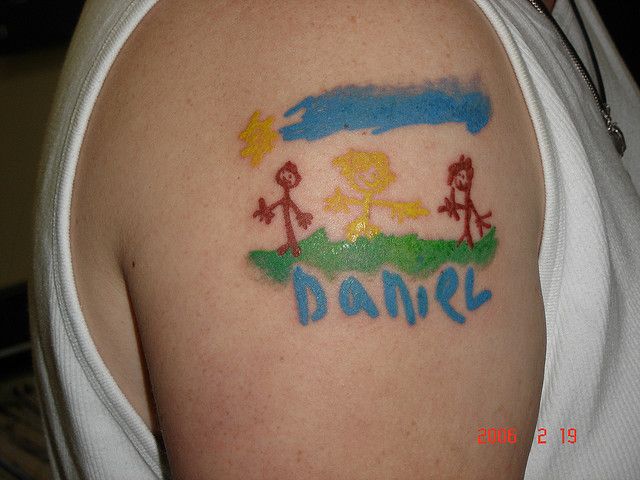 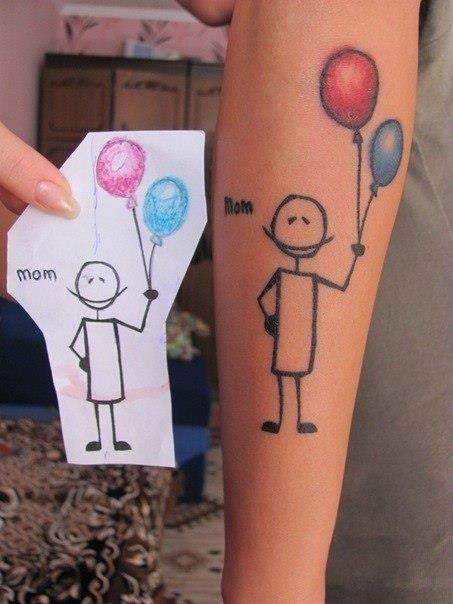 14. A humanoid with a round body 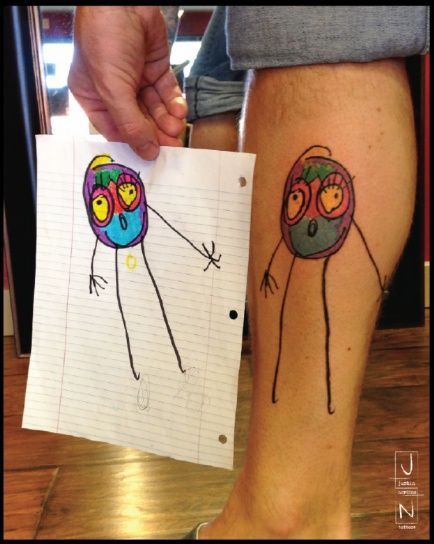 This drawing reminds me of Benson, a character from the Regular Show. Could this kid be watching it or he has imagined it? Maybe it’s an adaptation of himself, taking Benson’s shape. What’s for certain is that cartoons influence kids, so beware what you let them watch.

13. A serene composition of nature for kid art tattoos 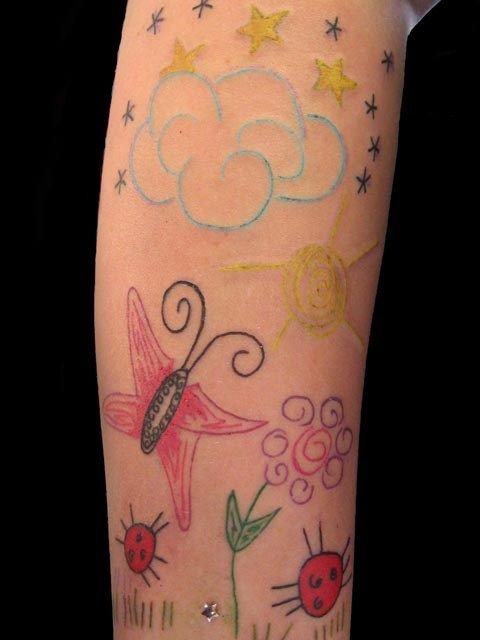 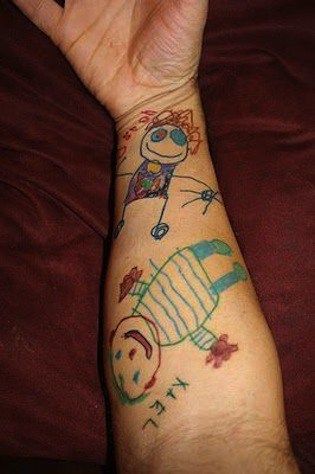 This tattoo could be about the story of a brother and a sister or of two very good friends, but I doubt a parent would get a tattoo of another kid. So, regardless of who these two characters are, it’s really important that they seem happy and that a professional tattoo artist was able to duplicate the drawing so well.

11. Walking on wheels and smiling with all teeth 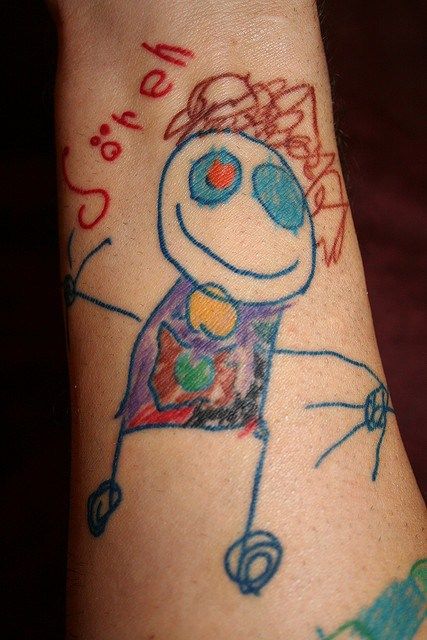 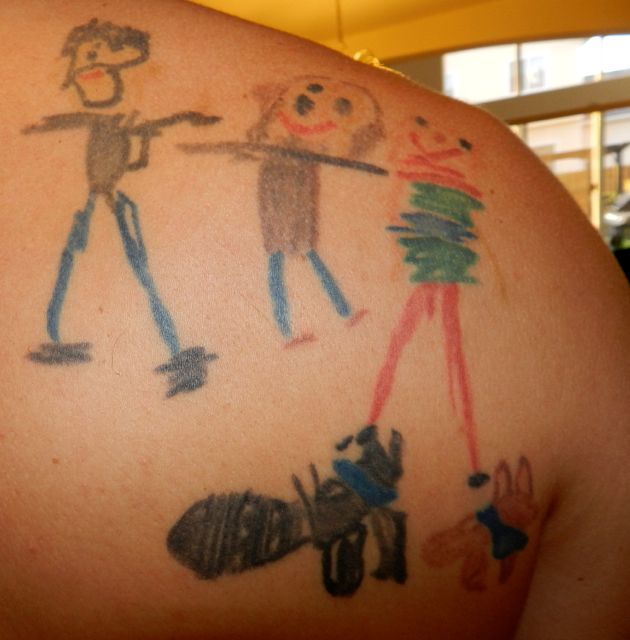 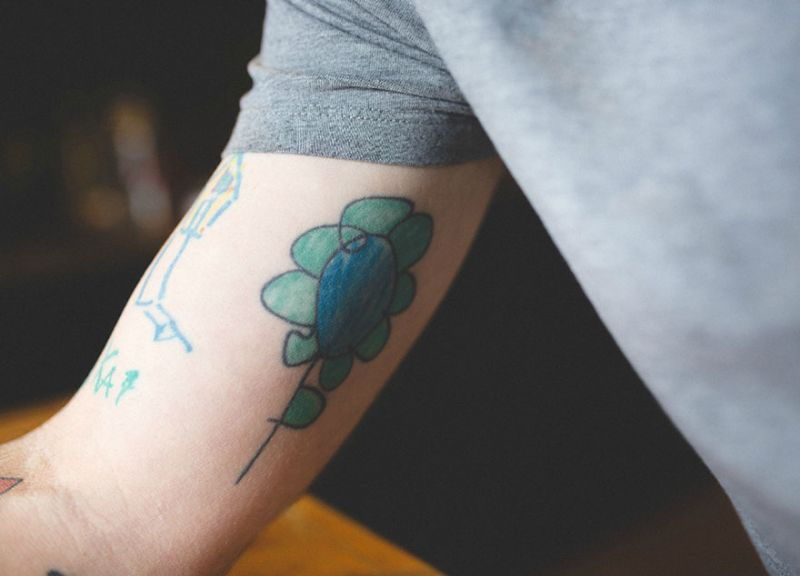 Kai is the name of Keith Anderson’s son. He was in kindergarten when he drew this daisy. His father was so impressed that he inked it on his arm. This is how it all started. No less than 5 years later, Keith is still getting tattoos of his son’s most inspired drawings, such as a seahorse, patriotic leaf, robot, a house and others. Keith is not planning on stopping. He will solve the space problem by asking Kai to draw smaller things.

8. Kai’s famous drawing of a robot

As Kai grew up, he lost interest in flowers and turned to more serious topics. He drew an entire composition of a robot, in a dark context when he was 10 years old. Keith Anderson picked the robot only as a tattoo design for his forearm. I think he did well because he saved space for future ink. 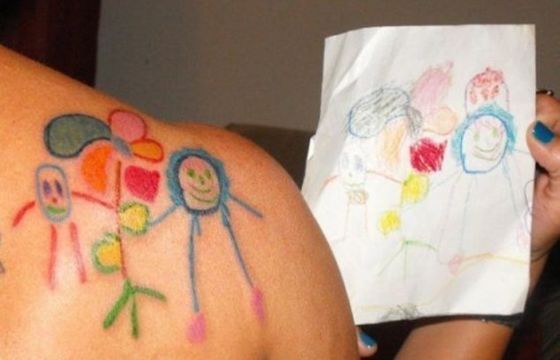 6. Kaylyn on her dad’s forearm 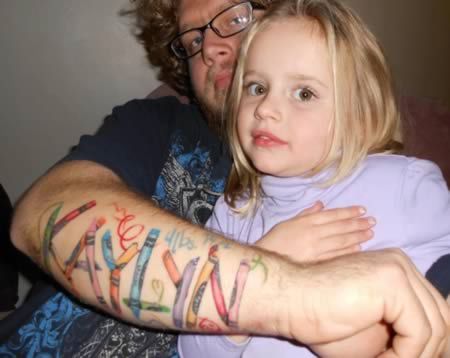 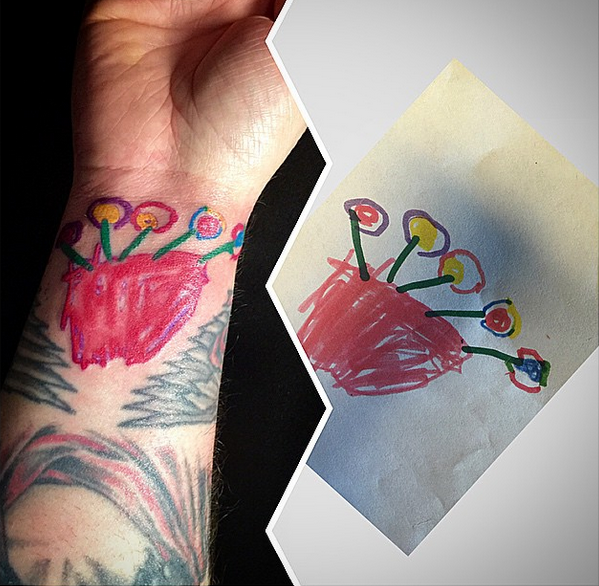 Except flower enthusiasts, I can’t think of any person who would like a flower pot tattooed on his or her wrist. This is another great part about kid art tattoos. They can determine you to get tattoos you never thought of getting. This is a gift to you, so appreciate it! 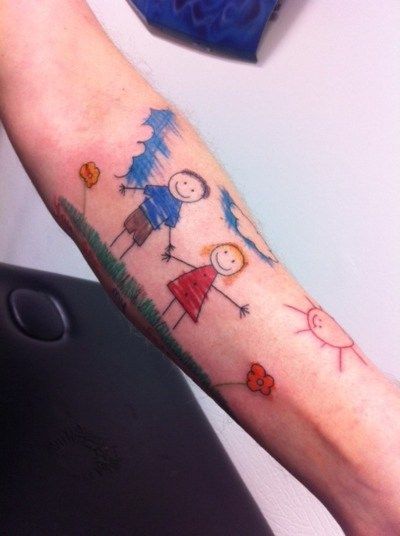 3. The tattoo versus the original drawing 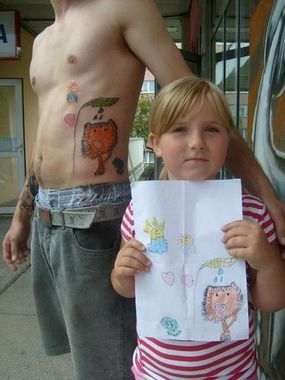 In case you were wondering how accurate kid art tattoos can really be, here’s your answer. The colors could be more intense since the tattoo artist isn’t using crayons, but other than that, they look alike. Isn’t she adorable? Hopefully she’ll stay creative and develop her skills over time. Parents can encourage their kids to be more creative by getting tattoos of their work. That’s called motivation. 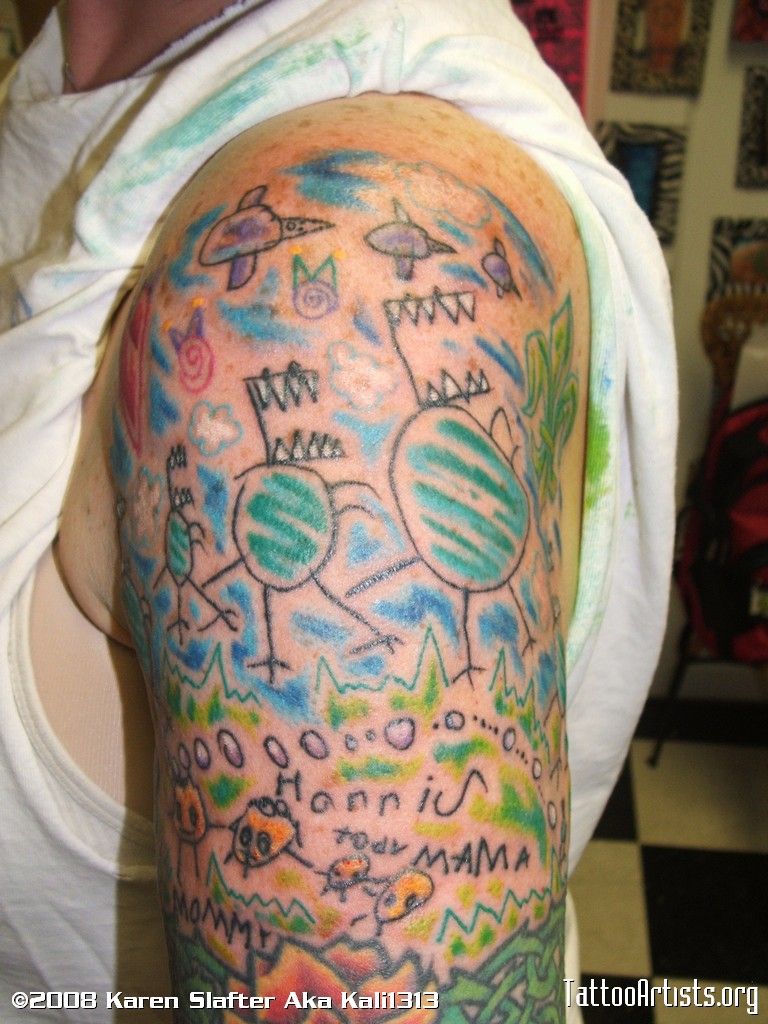 1. Pretty flowers and a boat bound by watercolors 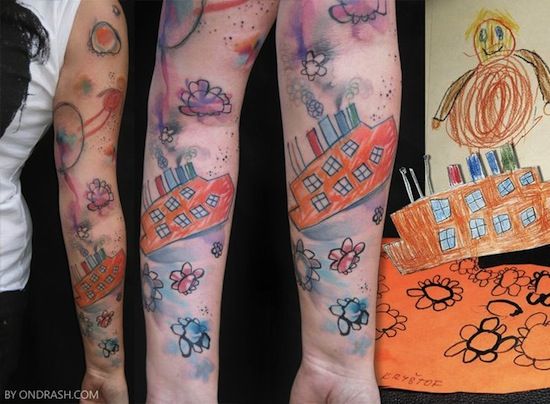 On the right side of this image you can see the original drawing. It turned from being 2D to being 3D and bound together by watercolors. This is an option too, but manipulating the original design will decrease its value. Or maybe that’s just a personal opinion. What do you think?