Shriya Saran, the talented young actress from down South seems to be creating ripples in the Hindi and South Indian Film Industry. She burst onto the scene with her first Telugu film Ishtam but her performance in Santhosham is what set her on the road to commercial success. She has had the opportunity of starring opposite Rajinikanth in The Boss which also earned her first award win for Best Tamil Actress.

Saran’s petite frame and earthy beauty are as much talked about as her acting performances. The actress is one of those few whose beauty radiates from inside out. Given that she is the brand ambassador for several stores across India for the endorsement of beauty and health products, when it comes to her own beauty regimen, Shriya keeps it simple and natural. 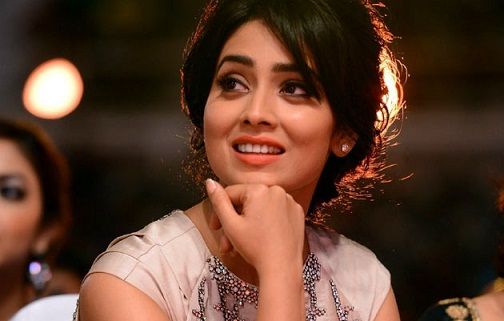 Shriya Saran credits her mother for her fine physique and beauty although she does take that extra step in matters of sleep, food and exercise and reverts to some traditional beauty recipes which work its magic on her. The southern star does not turn to high-end beauty products to keep her skin aglow. She wears as little as possible on her face when she’s not working.

Her skin owes its radiance to the power of rosewater which she loves and uses as often as possible for instant refreshment. She even carries a small bottle of rosewater mist with her and sometimes sprays it on her face after applying makeup for a beautiful glow. Her moisturizer is a mix of rosewater and glycerine which also acts as a toner. As for cleansing her face, she swears by the age old remedy of besan mixed with turmeric or yoghurt. 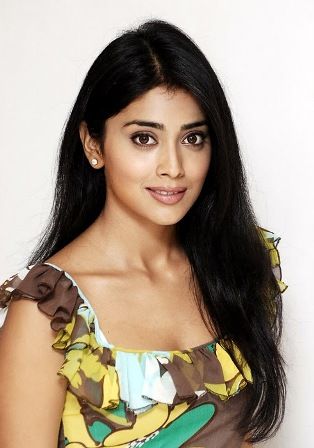 Shriya Saran’s big dewy eyes and long lustrous hair are one of the most halting features of her captivating beauty. Her silky smooth hair which is naturally long is almost always worn loose, draped over her shoulders to give her a flattering look.

Her eyes tell a different story. The southern star loves to accentuate her eyes with eyeliner, kajal and mascara and cannot go without them even if she can do without other makeup essentials. 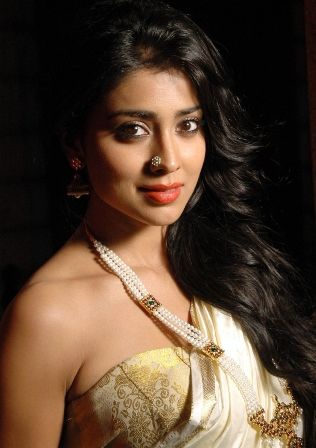 The actress’s sculpted figure is definitely one to be desired. The secret behind it is daily physical activity which forms the essence of her everyday existence. A Kathak trained dancer, Shriya loves dancing and swimming which have mostly helped keep her in fine form but ever since coming under the spotlight, her dancing has suffered due to her erratic schedules. She has since turned to the healing powers of yoga and meditation which she practices daily for 45 minutes. She tackles her problematic areas- the abs and arms and tones her body with a mix of power yoga and Iyengar yoga.

Her other workouts include alternating between cardio exercises thrice weekly, playing a game and swimming. The one thing she stays away from is weights which she feels don’t suit her diminutive body. 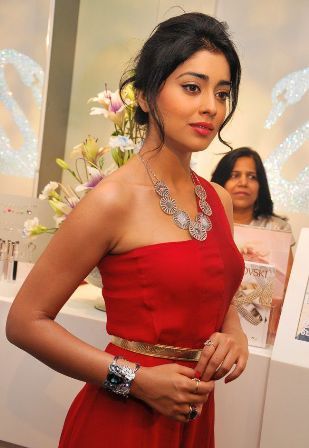 When it comes to her diet regime, Shriya Saran has a generous appetite which she makes no secret of, although she eats in moderation. She starts her day with a glass of orange juice and gives importance to the main meal of the day – Breakfast. Breakfast for the dusky beauty consists of an omelette made with the white of the egg, paratha and porridge and at times a dosa. Lunch is a staple Indian style bhindi with plain roti and dal. While she loves eating fish, she’s not as crazy about red meat and chicken. She doesn’t love junk food, the only exception being Subway and she favours Thai cuisine. 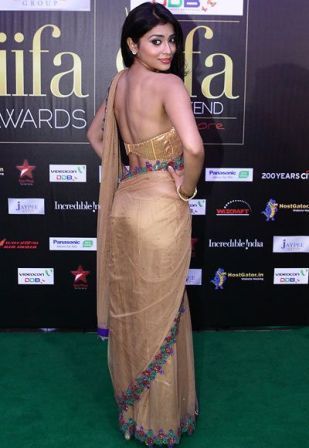 To maintain her perfect figure she restricts her salt intake and drinks plenty of water and juices. She also believes in eating small meals at regular intervals and can be found snacking on salads and sprouts. Shriya makes it a point to have dinner by 7:30 pm and ends her day with a glass of milk.

Shriya’s only temptation is chocolate, an indulgence she can never seem to rid herself of but a healthy diet combined with yoga has proved effective in shedding the extra kilos from those excesses.